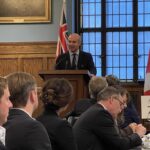 Mr. Browder previously spoke to our associations in 2015.

In April 2022, Mr. Browder published his second New York Times Bestseller “Freezing Order: A True Story of Money Laundering, Murder, and Surviving Vladimir Putin’s Wrath” an account of how he became Vladimir Putin’s number one enemy by exposing Putin’s campaign to steal and launder hundreds of billions of dollars and kill anyone who stands in his way.

The luncheon was attended by 135 guests, and once again the net proceeds from the luncheon will be donated to the Canada Ukraine Foundation.

A video of the event is available below (produced by Dream Arts Video):